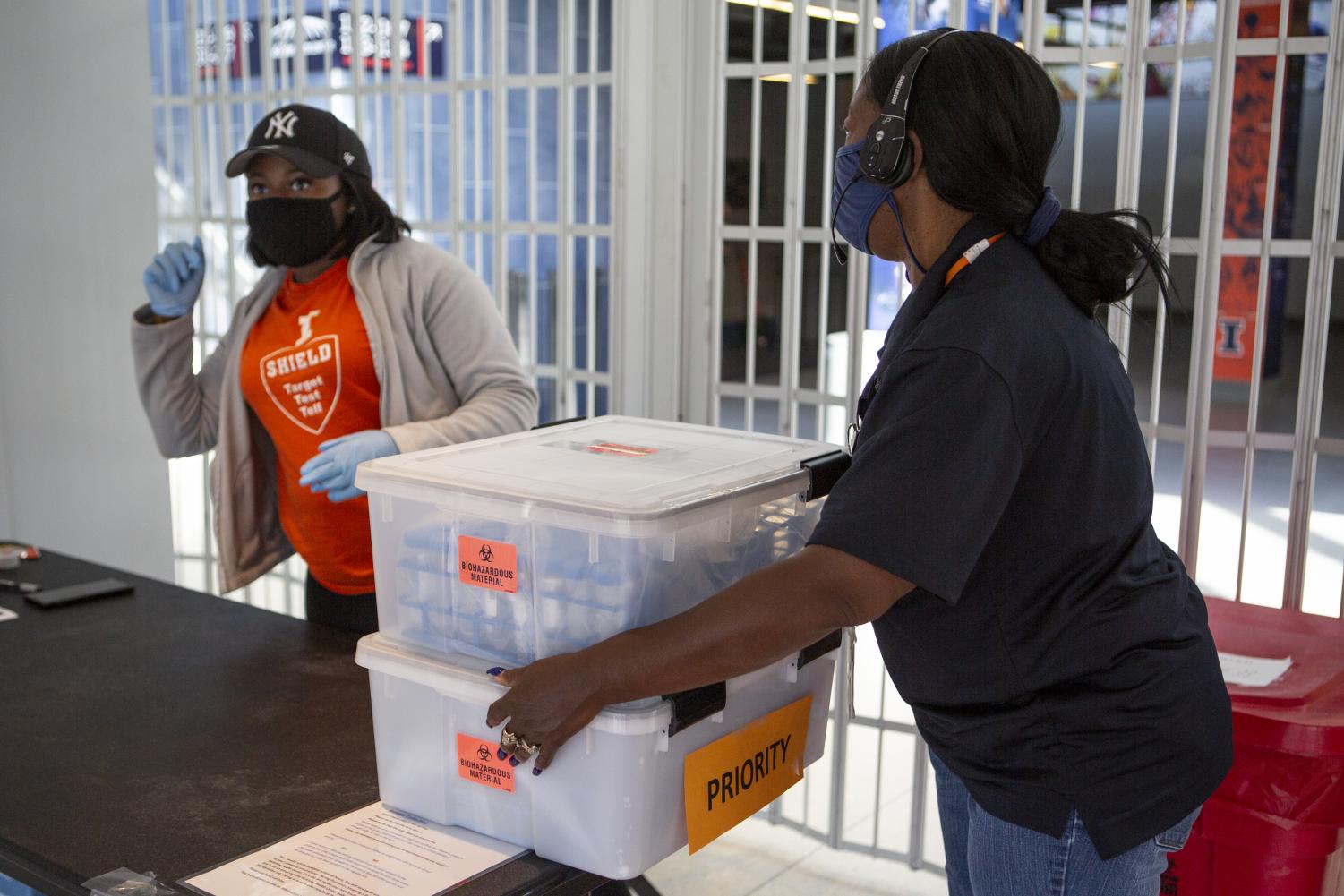 SHIELD testing workers carry a container full of Covid-19 tests to the State Farm Center on October 9, 2020. CUPHD plans to work with SHIELD and other departments regarding contact tracing and the new policy at statewide.

RS.22.02 called for Champaign-Urbana Public Health District contact tracers to notify teachers of positive COVID-19 cases and to collect details of interactions from those who test positive.

As of January 1, contact tracing in Illinois is handled exclusively by the Illinois Department of Public Health through an opt-in system. This is intended to serve people who are more at risk than the general population.

Awais Vaid, deputy administrator and epidemiologist at CUPHD, noted that contact tracing may have limited utility in the classroom environment.

“Notifying individuals about classroom exposures would be a very small percentage of people being documented,” Vaid said. “Even with that, the information that is captured would be delayed for days.”

The goal of the resolution was for the CUPHD to provide notification of positive cases to instructors within two days. It refers to the system employed by the University of Illinois at Chicago, which operates independently through the UIC Contact tracing and epidemiology program and provides notifications quickly.

The move to a statewide opt-in system leaves the University without an extensive system to notify instructors of positive cases in classrooms.

Bruce Rosenstock, sponsor of the resolution and senator in the Department of Religion, believes the University should institute its own contact tracing system now that CUPHD can no longer provide that service.

“I think we should do the contact tracing ourselves,” Rosenstock said.

His proposal would involve a collaboration between the McKinley Health Center, SHIELD testing and the College of Applied Health Sciences. According to Rosenstock, this would include “a team of interns and students who would perform contact tracing for every student who tests positive on our campus.”

The main task of the team would be to contact the instructors, find out who the infected person interacted with and inform people who may have been exposed. Vaid mentioned that methods such as testing and contact tracing at all levels, which would have been viable a year ago, are no longer the best use of resources.

“I don’t think testing two, three or even seven times a week is the most appropriate use of resources,” Vaid said. “We are now moving from a pandemic stage to learning to live with COVID-19 through an endemic stage. What is more important is thinking about how we can protect the most vulnerable populations and reduce hospitalizations.

With the announcement of Governor JB Pritzker’s decision to repeal the mask mandate by the end of the month, Rosenstock expressed concern about the increased risk of transmissibility and believes potentially exposed students should be tested immediately.