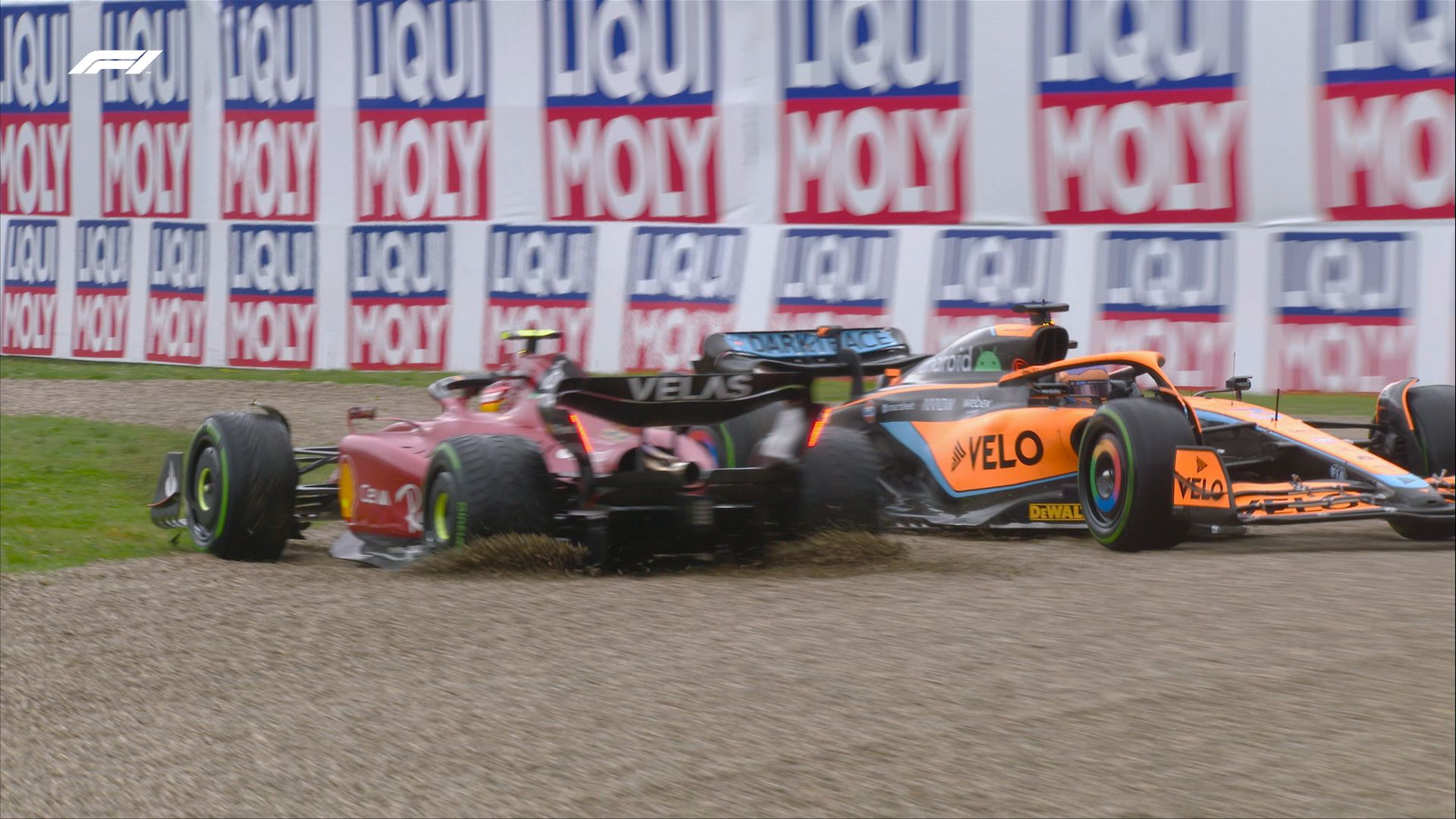 Ricciardo apologized to Sainz for contact with Imola; Bottas adds

Daniel Ricciardo has apologized to Carlos Sainz after the first-lap tangle of F1’s Emilia-Romagna GP as they and Valtteri Bottas elaborate on the incident.

Slippery conditions at the start of the F1 Emilia-Romagna GP caught up with McLaren’s Ricciardo on the first lap and early corners where he tangled with Ferrari’s Sainz. The collision also caught Alfa Romeo’s Bottas in the process.

Ricciardo was on the inside on the left-hander where his right front tangled with Sainz’s left-back. The Spaniard spun on the gravel which ended his race, while the Australian managed to get out of it but it still went badly.

Ricciardo apologized to Sainz after the race and accepted his mistake. This tangle also caught Bottas who ran into the Aussie’s back in the corner, but he managed to continue without too much trouble into the grand prix.

Ricardo: “We have to see how much damage has been and has affected us. I think from Carlos it was ok damage wise but then it was secondary once I hit him and spun him around then got a push from the back, so there’s a bit at the back of the car that I saw. At first, as soon as the safety car came out, all I remember is the push, so I initially thought I had been hit by Carlos, but I think originally, I was the one who rammed it, then I got some more help afterwards. From memory, turn 1 is going to jam, and I think I got on the curb, I tried to give myself a little more room, but I remember as soon as I got on it, I I just started sliding on it, and I was just sliding and then at some point Carlos had to turn left and then turn right and we just walked in and obviously I got his back.

“As soon as I hit him, I saw him spin, and I was just like ah, yeah, that’s not fun. So of course it ruined my run but also his. I obviously have to be responsible of that I don’t think it was something where I was locked up and buried in him so obviously tricky conditions I’m going to look aboard and see if there’s anything I could have done or if it was literally just so slippery I don’t know maybe there wasn’t much more In your head you say I could have been more careful, gone a little slower, but as soon as you are that person, someone else is going to do that to you or be inside of you. By being too conservative, sometimes you can put yourself in more danger, by putting yourself in a sandwich or something thing like that, so it’s hard, but I’m going to look on board and go to Carlos and apologize. An apology doesn’t change anything but at least for now it’s t all i can do.

Saint: “I saw that I didn’t have the best starts. To be fair to Charles, we have to analyze what happened there at the start, but you know, it’s a long race. So the start really in the rain, yes it’s better to have a good start, but we still managed to be clean in turn 2, and for some reason Daniel went into the pavement, left him lots of space, but I think he must have lost the front of the car and hit me with the unlucky situation where I got stuck in the gravel yet again. I really think I could have done differently there.

“It makes Daniel an athlete and a sportsman. Immediately after the race you could tell he had had a bad run, but the first thing he did was come to the Ferrari box to apologize to me. There was all the mechanics here with me, and we all thanked him for the gesture. That’s why there’s no hard feelings with Daniel, because what happened to him could happen to anyone today. Unfortunately, this must have happened to me, as I am coming back from the crash in Melbourne. It’s like that, the incident is not a mystery, everyone has seen on board and it’s very clear for everyone.”

Boots: “I was a bit scared at the start of the race, when I couldn’t avoid Ricciardo when he got tangled up with Sainz, but luckily we didn’t have any damage.”

Ricciardo and Ferrari hospitality to disclose to Sainz

Ricciardo went to Ferrari hospitality to apologize to Sainz pic.twitter.com/WvRz7tYWup