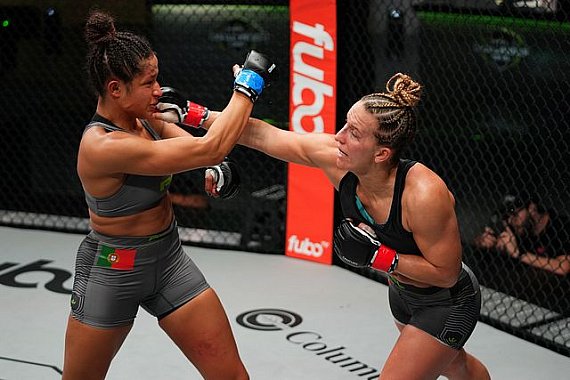 Count Martina Jindrova as the latest addition to the Professional Fighters League roster.

The polished and determined kickboxer did just enough to earn a split decision over Jacqueline Cavalcanti in the PFL Challenger Series 3 main event on Friday at Universal Studios in Orlando, Florida. All three cage judges scored it 29-28, with two of them siding with Jindrova (4-2). Subsequently, she secured a contract from PFL president Ray Sefo.

Cavalcanti (2-1) mixed up his attacks beautifully, made fluid positional changes and occasionally beat his counterpart to the punch. After a competitive first five minutes, Jindrova stepped on the gas on lap two. There she staggered Cavalcanti with her right hand, cut off his offers for desperate takedowns and continued to assault him with clean, precise punches in an attempt to finish. The increased production came at a cost, and Jindrova didn’t have much left in the tank by the third. Cavalcanti knocked the Czech’s head back more than once with dipping right hands and pressed the issue in the final period, but the save she needed didn’t materialize.

Meanwhile, Syndicate MMA exporter Jeslen Mishelle held off Julia Dorny with punches in the first round of their women’s lightweight. Bleeding from a cut on the bridge of her nose, Dorny (2-1) retired 3:51 into the first round.

Mishelle (1-0) paired pace with power and created a toxic mix. She beat Dorny with knees from the clinch, exhausted the German at close range and turned up the heat. Mishelle sent one right hand after another crashing into her fading counterpart’s face. Visible damage began to accumulate. She seated Dorny with a two-punch combination, hovered overhead, and pulled the curtain down with unanswered standing punches.

Elsewhere, former Olympic hopeful Jackie Cataline dazzled on her professional debut, as she put Camee Adams to sleep with a rear-end choke in the first round of their lightweight women’s attraction. A Jeremy Horn protege, Adams (0-1) lost consciousness 2:41 into Round 1.

Cataline (1-0) hit for a takedown in the first 30 seconds, floated into side control and eventually moved to a mounted crucifix stance, at which point she started throwing heavy punches. Adams turned away from contact but exposed her in the process. Cataline turned around behind her, squeezed the choke and turned off the lights.

Finally, American Top Team’s Michelle Montague submitted Olivia Parker with a rear-end choke in the first round of their women’s lightweight showcase. Parker (4-3) conceded defeat at 3:57 of the first round, suffering his third straight loss.

Montague (1-0) advanced behind kick-punch combinations, dove into a belly-to-back suplex and climbed into an advantageous position. She applied her ground and pound, progressed backwards and got to work on the choke. Parker resisted his initial advances but only prolonged the inevitable. Montague readjusted, curling his arms in place and tightening his pressure until the job was done.