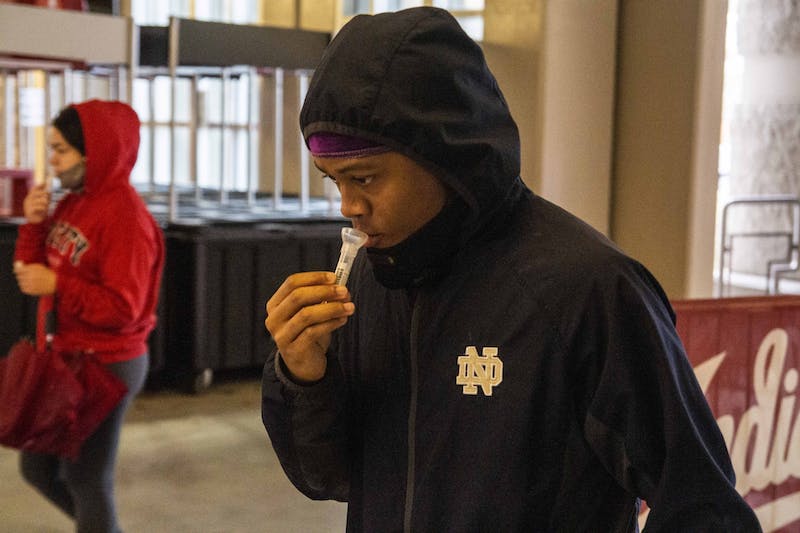 On Thursday, January 13, UI senior Peyton Conner’s home COVID-19 test was negative. The next day she had a sore throat. Conner took a symptomatic test that night, January 14, and received a positive result.

The growth in COVID-19 infections by the Omicron variant is thought to be the result of the variant’s increased transmissibility and its ability to evade immunity, according to the Centers for Disease Control and Prevention.

Theresa Vernon, program manager for IU’s contact tracing team, said the steady rise and fall in cases at IU correlates with the number of COVID-19 cases in Indiana. This semester is no different.

IU emailed and texted Conner for a daily symptom checker, but she said IU contact tracing never called her. Instead, she called them.

“They never contacted me, and it never looked like they were going to,” Conner said. “Maybe I just expected them to be a bit faster because I thought it was pretty serious.”

Conner told the contact tracer all the classes she had been in and who she remembered sitting next to. She also listed the friends she had been seeing recently.

“I felt bad that I was able to spread it,” Conner said.

She said her friends, whose full names she reported, were never contacted by IU contact tracing.

“I’m not necessarily sure how the system works,” Conner said.

On January 20, nearly a week after Conner tested positive, she said she received a call from a woman affiliated with IU Health, who recommended that she extend her isolation due to her ongoing symptoms.

As Conner filled out the daily symptom checker, he told her to self-isolate until day 10. However, she said she received a conflicting email from IU telling her that the self-isolation period was completed on the fifth day.

The CDC changed its recommended isolation period from 10 days to five on December 27, 2021.

If IU’s response to the spread of COVID-19 was better at the start of the semester, contact tracing would be easier, Conner said.

“I feel bad because I really think there’s this overload of cases right now, but I think it’s something that probably should have been resolved in the first few weeks,” Conner said.

Vernon, program manager for IU’s contact tracing team, said contact tracers contact all students, faculty and staff on all IU campuses or with any affiliation with IU. .

IU has 23 contact tracers, including 10 full-time and 13 part-time, Vernon said in a follow-up email to the Indiana Daily Student. Seven of the part-time contact tracers are graduate and undergraduate students at UI, she said.

IU’s contact tracing team took steps to anticipate communication, Vernon said. The automated email, sent to anyone IU knows of a positive test, contains the information needed to safely isolate themselves, she said.

“With the isolation period shortened to five days, in the surge of positivity, we’re just not reaching every person,” Vernon said. “We just do our best.”

Vernon said contact tracers were doing what they could to speak to people who tested positive by day five. If it is day 6 to 10, tracers still want to speak to the individual and see what close contacts they can identify who may still be in their quarantine period.

“In an ideal world, we typically reach people within hours,” Vernon said. “But now it can take up to three days to get to someone and then their isolation is almost halfway there.”

In a follow-up email, Vernon said that if someone received a voicemail from a contact tracer, it would be helpful for the person to call the contact tracer back rather than wait for a second call.

“Contact tracing is only as good as the information we get from the individual,” Vernon said.

Vernon said if any close contacts develop symptoms, they should schedule symptomatic testing.

Close contacts who are vaccinated should wear a mask for 10 days and get tested on the fifth day. Unvaccinated close contacts must quarantine for five days before getting tested, she said.

Junior IU Lizzie Hicks tested positive for COVID-19 on January 13. She said IU contact tracing never called her. However, the Indiana Department of Health sent him a survey via text message asking him to identify his school, address and close contacts.

Hicks listed her roommate and friends she had recently spent time with as close contacts. Her roommate was also given an IDOH survey to complete regarding her symptoms, but never received a call from UI contact tracing.

“I don’t think she was contacted by IU at all,” Hicks said.

After five days, Hicks said she returned to class. Although she did not receive a negative COVID-19 test, an email from IU advised her to return to class after five days if she had no symptoms.

Hicks said she didn’t know who was considered a close contact for in-person classes. She did not list any of her teachers or classmates as close contacts.

“It also doesn’t look like IU is really reaching out,” Hicks said. “They didn’t directly ask me about my close contacts.”

Olivia Seibert, a freshman at IU, lives in Forest Quadrangle. She tested positive for COVID-19 on January 25. IU contact tracing called her about a day later to find out when her symptoms started and where she had been a few days earlier, she said.

Seibert said she thought it was odd that her friend, listed as a close contact, was called by contact tracing but not advised to get tested.

“They just suggested if she started having symptoms to get tested, but she could carry on as normal,” she said.

“We just had more positive cases in January than almost any corresponding month during the pandemic,” Carroll said.

Carroll said IU should prioritize calling those who test positive for COVID-19 in collective accommodations such as dormitories and Greek accommodation and immediately send automated messages to people.

Carroll said the primary focus is outbreak management, which is most likely in community life. Those who might have a significant number of contacts, such as in IU Athletics, are also prioritized, Carroll said.

“Everyone receives information the second we know of a positive,” Carroll said. “We talk less to educate them on what to do and how to take care of themselves, we just need to talk to them about how much contact they may have had.”

Phone calls from contact tracers will take longer to receive than automated messages, he said.

“Even though we don’t reach them as quickly by phone, they still have the information they need,” he said.

“There is no doubt that with Omicron we are catching up,” said Carroll.

The vast majority of transmission comes from household contacts, Carroll said. Many other transmissions come from parties, bars and restaurants, he said.

“Classroom transmissions are just rare,” Carroll said. “For most people, class isn’t even close to the riskiest thing they do.”

Carroll said it’s difficult to stay ahead of the spread because tools to manage other variants of COVID-19 don’t work as well with Omicron’s rapid pace.

“We try to be as nimble as possible and minimize risk,” Carroll said. “We can’t test our output from this one.”