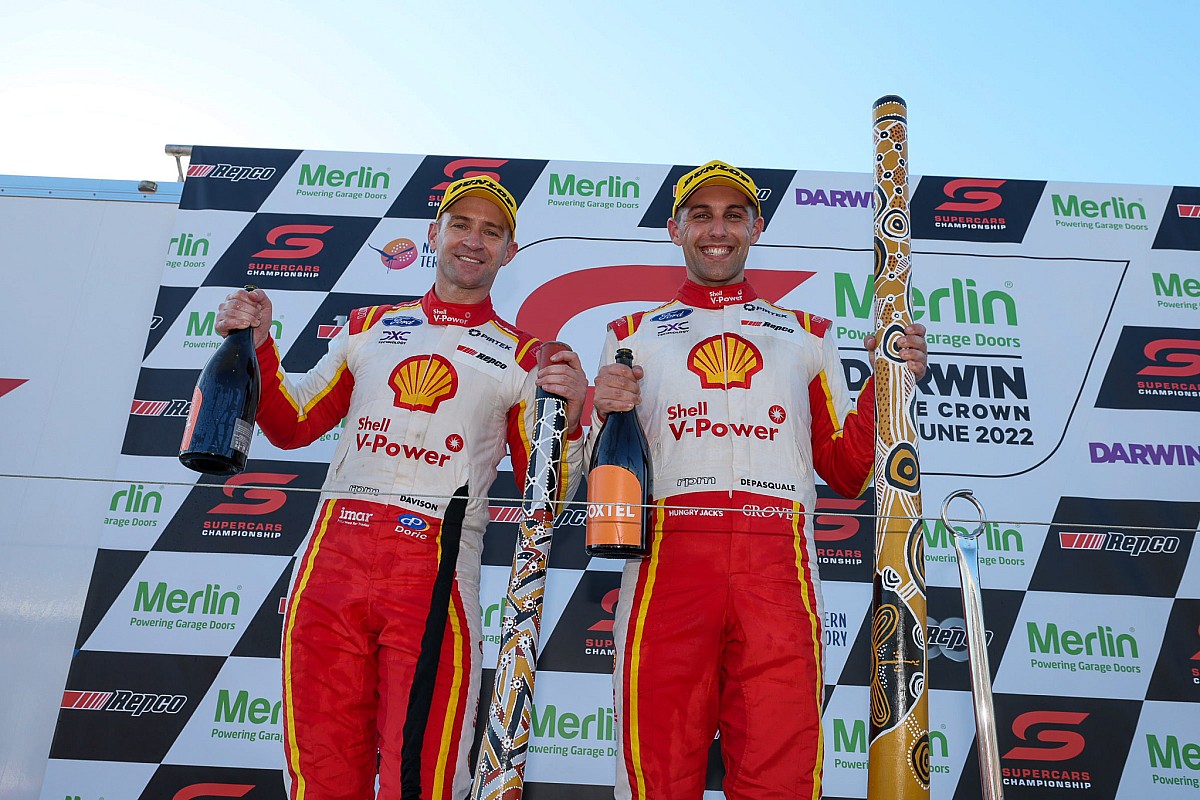 The duo secured a one-two finish for Dick Johnson Racing in the opening round of the Supercars Darwin Triple Crown tonight.

The decisive moment of the race came on the opening lap when De Pasquale, starting second, dove under Davison at Turn 5 to take a lead he would hold until the finish.

The move wasn’t entirely clean, however, with De Pasquale and Davison making light contact at the right-hander corner point.

Speaking after the race, Davison admitted he did not expect contact on the way to the turn and had hoped they could race side by side so he could have the inside line into Turn 6 .

However, he also stressed that he had no qualms about De Pasquale’s move, which was set up by a high line to Turn 1.

“Anton pulled off a great shot, what can I say?” Davison said.

“I actually led the first corner and thought, ‘Maybe I’m here’ and then he did the major dive around the outside [of Turn 1].

“It’s tricky with your teammate, side by side in a corner like that. You don’t really want to touch each other, so I gave him space and he did a good job hanging on to the outside.

“And down in [Turn] 5 I thought maybe I could hold on to the outside, then there was a little touch. It doesn’t matter, just look at what happened there. I did not expect that.

“It’s just what’s happening up close there, the cars are moving and sliding and bouncing. We just got a little tangled up. There was nothing more than that.”

Davison added that if it hadn’t been for his teammate next to him he would have been more aggressive trying to take the other car off the line at Turn 1.

But he says once De Pasquale got a decent run on one he was a sitting duck for Turn 5.

“Round 1, anyone else, I could have shoved him a little harder and had a little contact just to put him in the balls. But you don’t want to touch your teammate.

“He held up well in the middle of the track, there’s often a bit of marble there. But he was able to maintain really good mid-corner speed in Turn 1 and I got stuck and I couldn’t do much. Congratulations to Anton, it was a great initiative.”

The one-two result came in a landmark race for Davison, with the veteran making his 500th Supercars start.

He is convinced that he could also have secured a decisive victory if he had been able to hold off De Pasquale in this first round.

“As we saw, there was nothing between us from that point on,” he said.

“We were going to work together eventually, so we knew the start was crucial. Then we were going to settle in and make sure we were both managing the tyres.

“From then on we managed a very similar pace. That’s what’s important these days, leading that first corner. And it wasn’t my day.”