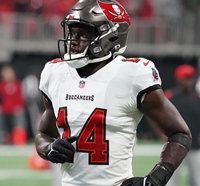 Last night Jeff Howe from Athleticism reported that it was premature to suggest the Bucs will franchise wide receiver Chris Godwin for the second straight season. Why? Because Bucs AC/DC-loving general manager Jason Licht had something else up his sleeve.

And indeed, this morning, BSPN’s Diana Russini reports that Licht and Godwin’s side are trying to get a deal done before the 4pm deadline today.

Joe has long stood by the Bucs’ smart move this offseason to sign Godwin and tag center Ryan Jensen. But that was before Tom Brady retired (?). Joe is a firm believer that if Jensen walks through the front door of One Buc Palace, there’s all hope that Brady can change his mind and play for the Bucs in 2022 too.

Brady will not return to a team that has lost two Pro Bowlers tasked with keeping its jersey clean. That’s all we can say about it. Left guard Ali Marpet has retired.

The Tampa Bay Buccaneers are currently working on a long-term contract for receiver Chris Godwin. If a deal isn’t reached between the two sides by 4 p.m. today, expect Tampa Bay to score it for the second year in a row, the sources say.
A source “It could be summed up in the thread”