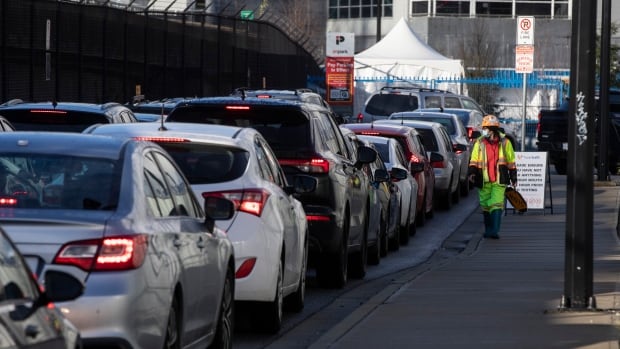 British Columbia public health officials have said contact tracing and testing sites are at maximum capacity as the province goes through its worst surge of COVID-19 yet, primarily due to the variant most infectious Omicron of the new coronavirus.

Health officials announced 2,441 new cases of COVID-19 on Friday – the fourth consecutive day with a record number of daily cases in the province – with 1,613 cases of the Omicron variant identified in British Columbia so far, of which 959 have been identified in the Vancouver Coastal Health Authority.

“If you have symptoms of COVID-19…you should assume you have COVID and take steps to avoid passing it on,” provincial health officer Dr. Bonnie Henry told a conference. press Friday.

“Omicron is different…in a way, we’re in a different game.”

Henry said testing should be available to those most at risk as well as healthcare workers who need negative tests to work.

She therefore urged British Columbians not to get tested for travel purposes and to be proactive with self-isolation if they suspect they have COVID-19.

On Thursday, the province conducted 20,133 polymerase chain reaction (PCR) tests, the most ever done in a single day in British Columbia, according to Health Minister Adrian Dix.

With long lines at testing sites, officials said “triage” was underway at Vancouver Coastal Health and Fraser Health health authorities, with some of those seeking a PCR test receiving instead a rapid antigen test.

“If you’re younger and don’t have any underlying risk factors, especially if you’re vaccinated, a rapid test may be the most effective way for you to get what you need,” Henry said.

Vancouver Coastal Health has opened a new testing center at the University of British Columbia’s Life Sciences Center that will be open seven days a week from 9 a.m. to 7 p.m. The health authority says it will temporarily divert people accessing COVID-19 testing services at St. Vincent’s testing site to the new UBC site starting Christmas Day due to the warning from winter storm.

The UBC site will be indoors, according to the health authority, but it can perform the same number of tests as the St. Vincent site.

The health department said it will work closely with UBC to ensure safe access to the site, including in inclement weather.

The elderly and those who are immunocompromised, as well as young children, are now prioritized for PCR tests, the gold standard test for confirming or ruling out an infection.

People in their 60s across the province are encouraged to book their third injection six months after their second dose, as well as clinically vulnerable people. Currently, people over 63 are invited to reserve their shots.

“Our deployment continues to be robust,” Dix said. “Twenty percent of the eligible population [has] have already received their third dose.”

A total of 147,371 vaccinations are expected to be administered between Dec. 22 and Jan. 2, according to Dix, and he urged anyone who received an invitation to reserve their shots.

Henry revealed the latest set of public health orders at a news conference on Tuesday.

Pools can continue to operate, but staff must scan proof of vaccination QR codes before allowing users to enter. Hotel swimming pools are exempt.

Personal gatherings are always limited to your household plus 10 guests or one additional household. All household members should be vaccinated.

The new rules do not include travel restrictions in British Columbia before Christmas. The province has emphasized the need to balance family mental health with reducing the spread of the virus.