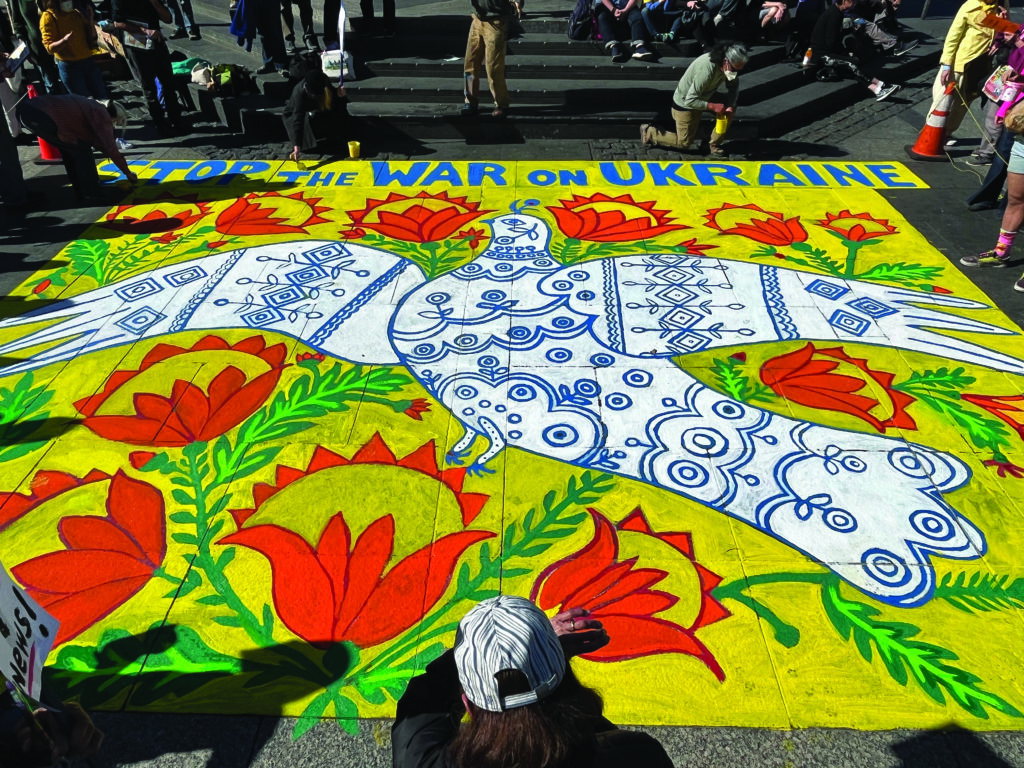 A Ukrainian filmmaker and editor work together during the war

Last November, I needed a video editor to produce lesson videos for an online course. So I did what we do these days. I posted the job on a global recruitment platform and found Sofia, who had the visual sophistication and technical skills I needed. I paid no attention to its location: kyiv, Ukraine.

In January, as the headlines started to sound, I thought I’d better acknowledge the situation there. I lightly asked how the mood was. “It must not be easy to have 150,000 Russian soldiers staring at you,” I wrote. She replied that people are indeed tense, but she just tries not to think about it. I didn’t talk about it any further, not wanting to make her think.

Then, on the Monday before the invasion, it seemed time to reconnect. This time she wrote about the good days and the bad and tried not to panic. She had taken a survival skills course and was stocking up on food and medicine.

The next morning, I wanted to do something to cheer him up. I had just attended a screening of Charlie Chaplin city ​​lights accompanied by the Oakland Symphony, so I found a YouTube clip of the boxing scene and sent it to him, hoping it was an appropriate choice. She responded enthusiastically, “Thank you! Just what I needed! Hilarious!” I commented that Chaplin was way ahead of his time with his parody of hyper-masculinity. “Exactly!” she replied.

On Wednesday, I saw US intelligence reports predicting an invasion at 4:00 a.m., 6:00 p.m. PT. I messaged Sofia saying, “I imagine it’s not easy to focus on work at this point. But I think work may be giving you the distraction you need. Just tell me how you are. I kept an eye on the news while Sofia slept, and at 7 p.m. the first reports appeared. Before going to bed, I texted again, “I’m so sorry this happened. Know that many people around the world feel anguish on your behalf. In the morning, I found her response: “I woke up to the sound of the explosion today…” I asked if she had time for a Zoom call. She said yes.

“Is it quiet where you are now?” I asked. “Yes,” she said, “we haven’t heard any explosions since about noon.” It was 7 p.m., his time. A few days earlier, she, her sister and her husband had gone to her parents’ house just outside kyiv. I told him that we see images of explosions and tanks crossing the border, but we don’t see anything about the Ukrainian army yet. How are they? “They’re excited,” she said. “They have been waiting for months. But our government has already announced that a Russian unit has surrendered. They don’t want this war.

I asked her if she wanted to try to continue working. She said yes. “Except it’s hard because so often you forget what you’re doing.” I told him that I understood. I was living in New York when 9/11 happened. I well remember the inability to concentrate. I let her know that whatever she can handle is fine. We agreed to continue communicating on Telegram, his favorite messaging app.

Since then, I’ve texted her every morning and night, sending quiet or upbeat photos and saying encouraging words. She responds with deep gratitude, giving updates and sharing memes that are circulating.

On the second day, she reported that she and her husband had gone back to their apartment in the southern part of Kyiv to get things, but decided to stay behind to volunteer making first aid kits and donating blood. . Then they discovered the advantage of having anti-aircraft sirens to warn them and an underground parking lot to drive to. “In the suburbs,” she writes, “you are always afraid that something will fly into your house at any moment.”

I sent her a picture of my front deck, with blue and yellow balloons tied to the railing. She sent me back an animated gif of a cuddly dinosaur with hearts sticking out of it.

Then she reported a day spent collecting food for the volunteer center and spending two and a half hours in line at the grocery store. She apologized for not completing the editing review. I said, “Please don’t apologize for not working!” I’ll assume nothing is done until you tell me you have the bandwidth to focus again.

She sent me a picture of a two-person tent on the concrete floor of a brightly lit parking lot. “It’s our sleeping arrangement tonight,” she wrote. I sent a picture of a beach in California. “Wonderful!” she replied. Then she teased me about how cold it is in San Francisco, because I had told her earlier that people here start complaining when it hits 50 degrees. I checked the temperature in kyiv that night: 35 degrees.

I told him that I had seen so many stories of people saying, “Fuck you!” I felt it had become Ukraine’s rallying cry. She sent me the YouTube video of the radio communication between the Russian warship and the Snake Island border guards that started it all. I couldn’t stop laughing at the audacity in front of the Ukrainians.

I told him that I had watched the documentary “Winter on Fire: Ukraine’s Fight for Freedom” and had been amazed by the bravery, dignity and integrity of the Ukrainian people. She replied that her sister is in the movie. I told him that I stopped him at one point because I thought I saw someone who looked like him. She sent me a gif of Dwight from “The Office” saying, “That’s right.”

I expressed my frustration that the Russian people are not yet numerous enough to protest against this war. She replied with a long explanation of Russia’s oppression of Ukraine, going back to the Soviets making them second-class citizens, calling them Nazis, killing their intellectuals and making Ukrainian the language of rural and illiterate, when in fact kyiv is 665 years older than Moscow. I said, “Oh, I see, Putin is exploiting this prejudice story.” “Exactly!” she replied.

Meanwhile, the editing reviews kept coming, despite my insistence that I expected nothing from her. When she finished part 7, I said, “Now please stop working!” I sent her an advance of $300 and told her she could sort it out once peace was restored. She wrote that it brought tears to her eyes, but she had already started part 8, so she’ll just finish it first. Then she wrote: “More air raid sirens. I have to go.”

I was careful not to ask questions, not wanting to make any demands on her. But I had little sense of his daily life, and my anxiety grew. On Friday, I requested another Zoom call. She came barely visible and apologized for not having any lights on. They hadn’t yet covered their windows. Only his face was visible in the glow of his computer screen. I was glad to have a white wall behind me to help light it up. It was 6 p.m., his time.

She told me that she and her husband are still in kyiv, but mostly live with her sister, whose apartment is in the same building but on a lower floor. They feel safer there, closer to the car park when the sirens sound. His mother is also with them. His father left to join the Citizen Defense Forces. Her husband is a developer and has therefore worked with cybernetic forces.

Sofia volunteered for the Creative Forces of Ukraine, making anti-disinformation videos for Russian citizens, to expose the truth about the war. But the job requires sorting through endless images of violence and destruction. She can’t do so many things at once. And it’s hard not to get distracted while scrolling through the news. I told him I understood, I have the same problem.

I asked if she was still sleeping in the parking lot. “Yes of course!” she says. I said it must be cold. “Oh yes, it’s very cold.” Do you have a good sleeping bag? “Yes, but I sent it to the military forces. We have another one that we sleep on, then we put blankets on us. “Really, it’s not that bad,” she said. “We have hot water, heating and electricity.

I joked that I wanted her to teach me to say, “Fuck you!” in Ukrainian. “Oh no, no, no,” she said. “These are very big words. They are Russian words. Very aggressive. Ukrainian swear words are not like that. They are lighter and a bit funny. I imagined Ukrainians, in a fit of annoyance, shouting Shakespearean insults.

I told him that I continued to think that Ukraine had such a beautiful flag, so bright and cheerful and with an elegant simplicity. She told me it depicted wheat fields and a blue sky.

I am amazed by visual poetry. And I can’t help but notice a pattern: a bright, cheerful flag; light and funny swear words; a comedian as president.

As we prepared to part ways, she said the call comforted her. We had a long silence. I said, “God bless you,” and I felt the tears welling up. She said, “Thank you.” Another long silence. Finally, we separated. The bubble we briefly shared, giving him an illusion of relief and me a hint of war, split apart, sending us back to our respective realities.

I follow the news closely, then carefully craft each post to avoid any unintended displays of American ignorance. Even still, on Friday night I had a misstep when I was in Oakland and saw Ukrainian artwork projected onto the side of a building, captioned with the words “Bombed Art by Putin” and “Boycott Russia”. I sent him a picture and said, “Maybe you know this artist?

The next morning, I found her answer: “It’s Maria Prymachenko!” She pointed out that the name appears in the lower right corner (duh!) and included a link to the Wikipedia page. I wrote: “Please excuse my ignorance of Ukrainian art! and conscientiously studied this 20th century artist, of whom Picasso once said: “I bow before the artistic miracle of this brilliant Ukrainian.

Looking for a Bay Area gathering to lend my presence to, I read that at the Ferry Building in San Francisco on Sunday, a group of artists would be reproducing one of Prymachenko’s most famous works, ” A dove has spread its wings and asks for peace”. .” I was worried it would be hard to find, feeling a little desperate to get a photo for Sofia, maybe to correct my ignorance. But upon arriving in the square, the gathering was easily apparent.

Approaching, I rounded the tower and made my way through the crowd. Suddenly, spreading before me on the concrete, a burst of flowers framed the white and blue spread of a serene, pleading dove.

At 10 p.m. that evening (8 a.m. Monday in Kyiv), I sent the photos to Sofia. I woke up the next morning to a dancing cherry with this message: “That’s so cool! [smiley face] This incredible support really gives hope. [smiley face with hearts] Thank you for sharing !”

Is it really that bad to sleep with your contact lenses?